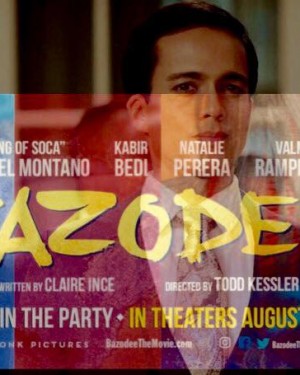 ‘Nikhil (played brilliantly by T&T-born, UK-based Valmike Rampersad) was Anita’s malevolent future brother-in-law…… Even though it was his first time in such a role, Rampersad was the perfect villain……..and the catalyst for all Anita’s woes. Through some sneaky snooping around, blatant macoing and nefariously shady one-liners, Nikhil managed to slither his way across the screen…’ – The Guardian

‘The standout in the cast is Britain based Valmike Rampersad….for me he is the real star of the movie and steals every single scene with his scheming and plotting. He is smooth and slithery and almost every word out of his mouth is hiding another motive….very memorable scene with him which is a highlight of the film’ – Newsday

‘The most memorable performance was from UK-based Trini actor Valmike Rampersad. His tense, uptight, always suspicious character Nikhil provided the depth and suspense to the movie. So convincing was he in his portrayal that during the cast introductions at the end, they had to stress that he was really a nice person.’ – Looptt film review

‘….scene stealer….The most impressive performance was from UK-based Trini actor Valmike Rampersad. His creepy, uptight, lurking, always suspicious character Nikhil provided the gravity and suspense to the film. He was as charming off screen as he was villainous onscreen….’ – Cambridge Writers Workshop

‘Rampersad’s character is the one that consistently drew my attention. What is he up to? What is he plotting? ….He indeed gives the stand out performance in this film. His character seems to have a few more layers to him than the rest of the cast and though the film is an easygoing light-hearted romp, he brings some needed depth and counterpoint to all the fun…  Also, those EYES. Sigh… but I digress. Rampersad is one to watch and I’ll definitely be checking out his previous and upcoming work....’ – RewindandComeAgain film blog

‘I very much liked Valmike Rampersad as the film’s “villain’.  He contrasts well with everyone he plays against, while seeming to enjoy the whole thing tremendously’ – Guyana Chronicle

‘Rampersad is effective as a weasely though perhaps misunderstood Nikhil’….OneFilmFan.com blog