BOOTS ON THE GROUND 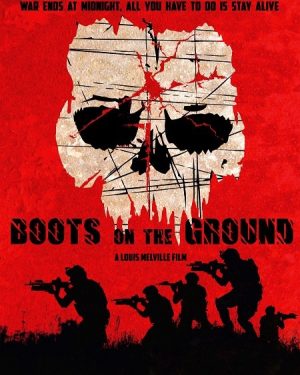 ‘One of the top 7 films to watch at FrightFest 2017’
‘One of the most innovative and challenging British movies of the year….this twisting and turning squaddie shocker is a genre ground breaker’ – the peoplemovies.com
‘the most level head of the bunch….Valmike Rampersad sells the character well especially as the film goes on and is given more and more to do…’ foundfootagecritic.com

BOOTS ON THE GROUND is a ground breaking British horror film, making cinema history by being the first British film to be shot entirely by its actors wearing 4k head cameras, replicating the video technology used by modern combat troops to record real-time action footage.  Valmike plays one of the five leads in this ensemble cast.  The film mirrors the style of 1st person shooter video games and combat documentary footage seen in TV shows such as the BBC series ‘Our War’. Add to this visual mix a good dose of classic chiller horror in the vein of ‘Deathwatch’ and ‘The Blair Witch Project’, and what emerges is ‘Boots On The Ground’.  Distributed by Moviehouse Entertainment. Directed by Louis Melville (The Man Who Sold The World) and co-produced by Alex Francis (MOON).