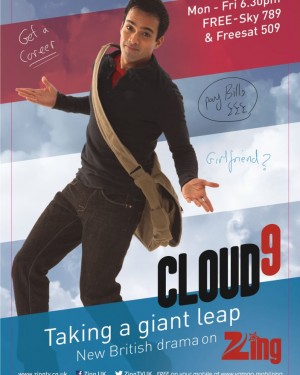 Valmike plays the lead role in the UK’s first of it’s kind British TV drama series, ‘Cloud 9’. The show caught Glamour magazine’s eye and Valmike was featured as ‘Watch This Face – We’re tipping him for big things’. ‘Cloud 9’ aired daily at 1830 and 2230, Mon to Fri on Sky TV and Virgin TV in the UK, as well as Zee Cafe in India. Valmike played the role of Ajay Shah, a 26 year old, sent by his Dad, to live away from home. Ajay takes you on a journey as he interacts with the residents of ‘Cloud 9’ – meets the love of his life played by Rakhee Thakrar (series regular Eastenders), gets into fights with the locals and is down on his luck. Too ashamed to return home, he works even harder to try to prove himself and turn his life around.